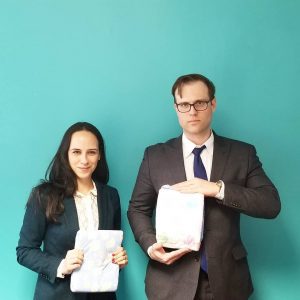 To prevent market place confusion among consumers, and to protect its Space® brand, Strom filed a lawsuit for federal trademark infringement, and related claims, in the Northern District of Illinois.  Strom also filed a motion for a Temporary Restraining Order (TRO) seeking a ruling that would immediately stop Tykables from promoting or selling Space Cadet diapers.

On Thursday February 15, 2018, Judge Lefkow granted Strom’s motion for a TRO.  Judge Lefkow ruled that Strom is likely to succeed in demonstrating that Tykables’ promotion and planned distribution of “Space Cadet” diapers constitutes trademark infringement and creates a significant risk of consumer confusion. The case is still pending and the next hearing will be held on March 13, 2018.  Here is a copy of the  TRO Order.

Casey Strom, Strom Holding’s CEO, is pleased with the ruling but expressed frustration that the case could not be resolved prior to litigation:  “I sincerely regret that to date we have been unable to come to a settlement that would protect our mark while minimizing the financial burden for both parties.”

For more information about this case or any other trademark matter, contact Daliah Saper at Saper Law or Anderson J Duff at Revision Legal.