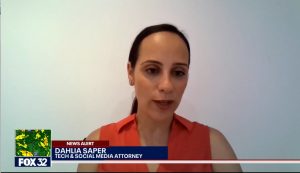 Twitter could be in trouble in wake of hacks on prominent users such as Joe Biden, Bill Gates, Barack Obama, and Elon Musk. With fraudulent intentions, these accounts were used by hackers to promote a Bitcoin scam. The tweet linked a Bitcoin wallet, asking users to send over large sums of money for a doubled profit.

In light of this massive security breach, FOX 32’s, Elizabeth Matthews, interviewed social media attorney, Daliah Saper, on July 15. In her interview, Daliah discussed Twitter’s legal liability exposure and what a scandal like this could mean for the platform’s future. The breach is serious enough, Daliah suggested, that it could potentially end Twitter and result in lawsuits if not properly addressed.

“All of these celebrities – these high-profile politicians are relying on Twitter as a platform to preserve the security of their accounts,” Daliah remarked. Yesterday, Twitter failed to uphold this trust. Online security is constantly gaining importance in our everyday lives, so social media platforms must be ready to meet this challenge.

The long-term impact of these hacks remains to be seen, but one thing is certain: Twitter has work to do to build back the trust of its users.

To watch the FOX 32 broadcast and Daliah’s contributions in its entirety, please see the video below: