On February 24, 2014, Fox anchor Jon Kelley interviewed Daliah Saper about a drug dealer’s criminal and civil legal culpability  when his customer dies from an overdose.  Saper Law’s overview of the  Illinois Civil Remedies Against Drug Dealers Act, which Daliah mentioned in the segment, is below. 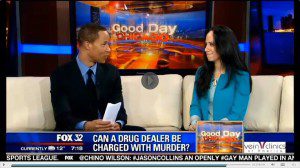 The shocking and tragic death of beloved actor Phillip Seymour Hoffman underscores the immeasurable cost of illegal drugs. Addiction, treatment, mental health problems, physical health issues, and even death round out the caustic and costly consequences of the illegal drug racket. And while drug dealers pocket millions, caring and concerned family members, spouses, and employers are left footing the bill. Fortunately, some states (including Illinois) have passed legislation aimed to help shift some of those daunting costs to those that profit from illegal drugs.

The express purpose of the Drug Dealer Liability Act (“DDLA”) is to “provide a civil remedy for damages to persons in a community injured as a result of illegal drug use.” This law helps ensure that no person profits from selling illegal drugs, period. As the Act puts it, “the persons who have joined the illegal drug market should bear the cost of the harm caused by that market in the community.”
–> 740 ILCS 57/10

The DDLA permits certain persons to recover damages for the “injury resulting from an individual’s use of illegal drugs” against those who “knowingly participates in the illegal drug market” within Illinois.
–> 740 ILCS 57/20

Who May Bring a Claim?

Who Can Be Sued?

Any person who “knowingly distributed, or knowingly participated in the chain of distribution of, an illegal drug that was actual used by the individual drug user” [Preponderance of Evidence Standard] –>740 ILCS 57/60(a)

*The second standard is fairly expansive. Unlike the Hoffman tragedy, most cases involving illegal drug use never find or identify the actors in the “chain of distribution.”  As the Act puts it, “the distribution of illegal drugs is clandestine . . . [i]ts participants expend considerable effort to keep the chain of distribution secret.” 740 ILCS 57/10(7). Indeed, the second standard is based on the “market liability” legal theory and basically permits a victim to sue any person participating in the illegal drug market (of the same type of drug used by the individual user), during the individual drug user’s period of illegal drug use, within the same Illinois Representative District (or broader depending on the level of the offense). 740 ILCS 57/10(9); 740 ILCS 57/15.

**Although the “clear and compelling” evidence standard is rather steep, the Act estops convicted drug criminals (convicted under Illinois law or Federal law) from denying participation in the illegal drug market. Such a conviction is also prima facie evidence of such participation during the 2 years preceding the date of the act giving ruse to that conviction. 740 ILCS 57/60(b).

What are the Possible Damages?

(1) economic damages (i.e. the cost of treatment and rehabilitation, medical expenses, loss of economic or educational potential, loss of productivity, absenteeism, support expenses, accidents or injury, and any other pecuniary loss proximately caused by the illegal drug use);
(2) non-economic damages (i.e. physical and emotional pain, suffering, physical impairment, emotional distress, mental anguish, disfigurement, loss of enjoyment, loss of companionship, services, and consortium, and other nonpecuniary losses proximately caused by an individual’s use of an illegal drug);
(3) exemplary damages;
(4) reasonable attorneys’ fees;
(5) costs of the suit, including reasonable expenses for expert testimony.
–> 740 ILCS 57/25

Such damages can be collected by an ex parte prejudgment attachment order against all assets of a defendant sufficient to satisfy a potential award.
–> 740 ILCS 57/65

This is the third in our 3-article series on restrictive covenants. Read our first article - read more...

This is the first in our 3-article series on restrictive covenants. Read our second article on Non-S - read more...

Want to Get Involved in the Cannabis Industry?