The Chicago Cubs recently released a revised plan for Wrigley Field’s “face-lift.” The renovation calls for new ad signs that would fully obstruct the view of the playing field from neighboring rooftop venues.  Needless to say, the rooftop owners are not happy. Each has a vested interest in Wrigley Field as it stands because they charge fans every Cubs home game to sit in bleachers atop their building and enjoy the nation’s pastime.  Moreover, the rooftop owners have a contract with the Cubs to exercise this rooftop right bleacher in exchange for 17 percent of venues’ gross annual revenue, which ranges from $3 million to $4 million a year. The contract was signed in January of 2004 and runs until Dec. 31, 2023.

In reaction to this newly announced plan, the rooftop owners have threatened to sue the Cubs over any changes that would block their high-demand ballpark views. Charles Tompkins, attorney for the Wrigley Field’s rooftop owners, has pointed out that the rooftop owners materially relied on the revenue-sharing agreement when they invested around $50 million to reconstruct and renovate their businesses.  The majority of this capital was money borrowed against mortgages.  Tompkin accuses Ricketts of having “buyer’s remorse” and attempting to renege on the parties’ long-term revenue-sharing deal.  Indeed, the agreement runs another nine years. 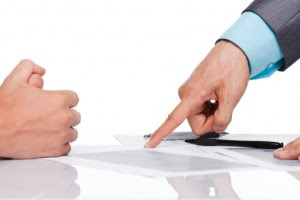 On the other side, Cubs Chairman Tom Ricketts  argues that the stadium has a right to expand and preserve the historical ballpark. He points out that the language of the contract allows rooftop view blockage when the obstruction is the result of any general expansion. Tompkins disagrees and argues that the ambiguous language needs to be read in context and only applies to the then-pending expansion of bleachers, not ad signs.

Regardless of the ultimate outcome, this entirely avoidable dispute provides but another cautionary tale for all those who write or enter into contracts:  those who do not prepare for the worst will likely have to face it.  Indeed, for contracts, clarity is king.  Because as the economic interests of once aligned-parties begin to shift, words start to look a little differently and ambiguity becomes the opposing attorney’s best arsenal.