In a recent decision, the Seventh Circuit Court of Appeals ruled that an onslaught of one-star reviews labeling a Skokie lawyer as “racist,” “chauvinistic” and “a waste [of] money,” etc. were not defamatory—even though the reviewers had never been his clients. Certainly not a traditional defamation matter, this case establishes an important precedent: people who have no connection to a business may be able to harshly review it without consequence.

When reviewers Victoria Chamara and others were slammed with a defamation lawsuit filed by bankruptcy attorney David Freydin, they enlisted the help of Saper Law Offices. Saper Law swiftly filed a motion to dismiss the claims, arguing that the defendants were merely expressing their First Amendment protected opinions.  The court agreed, ruling in favor of Saper Law’s clients. David Freydin appealed the ruling but, on January 28, 2022, the Seventh Circuit Court of Appeals affirmed the district court’s decision, holding that Freydin could not sue Saper’s clients, especially the ones who were sued for nothing more than leaving one-star reviews.

Two short sentences were the catalyst for this case. On September 26, 2017, Freydin publicly posted on Facebook: “Did Trump put Ukraine on the travel ban list?! We just cannot find a cleaning lady!” 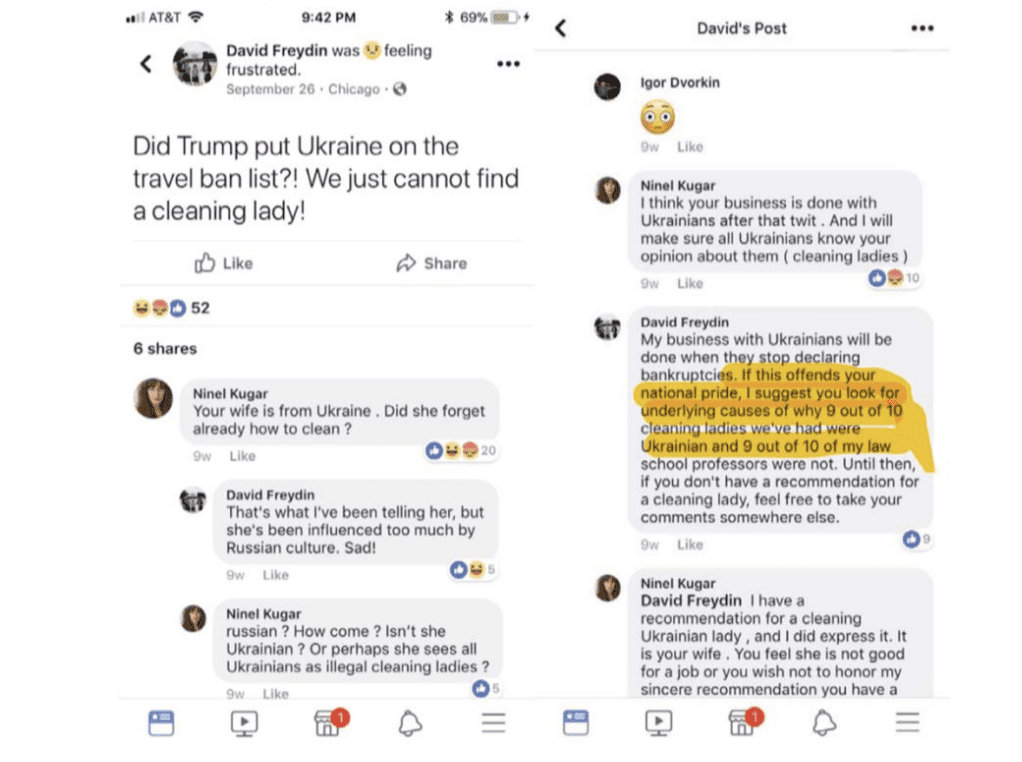 A wave of backlash and a slew of one-star reviews from the surrounding Ukrainian community ensued. These non-clients attacked Freydin’s business and character by writing disparaging comments on Freydin’s Google, Yelp, and Facebook business pages. 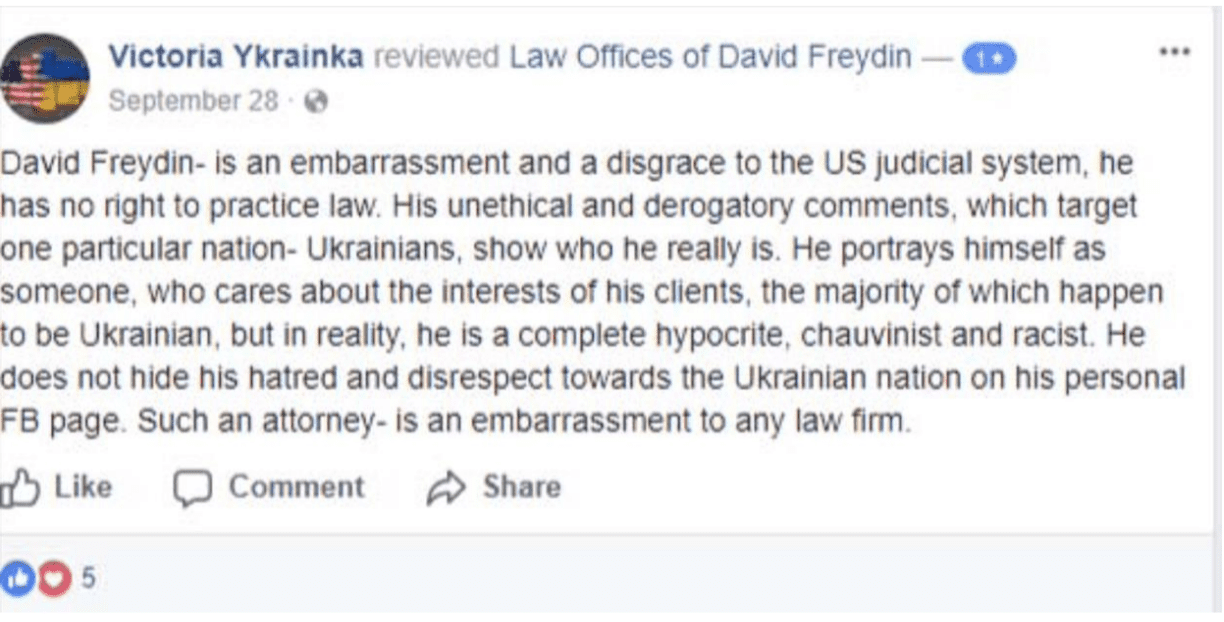 When challenged, Freydin doubled down on his original post, commenting:

“My business with Ukranians will be done when they stop declaring bankruptcies. If this offends your national pride, I suggest you look for underlying causes of why 9 out of 10 cleaning ladies we’ve had were Ukrainian and 9 out of 10 of my law school professors were not. Until then, if you don’t have a recommendation for a cleaning lady, feel free to take your comments somewhere else.”

Freydin didn’t stop there. He took to the courts, filing lawsuits against numerous non-clients for libel and civil conspiracy, among other claims. Defendants hired Saper Law to represent them in the case. Saper Law successfully drafted motions to dismiss the complaint which the district court swiftly granted. Freydin then appealed the ruling to the Seventh Circuit Court of Appeals, claiming, among other arguments, that the negative reviews were defamatory because they were not posted by Freydin’s actual clients.

In the appellate reply, Saper Law reiterated the basis for the district court’s ruling: that the defendant’s comments were merely opinions, not verifiably false statements of fact, and thus they did not constitute defamation. In addition, Saper Law argued that the comments made by the defendants needed to be considered holistically. When considering online defamation cases, context is crucial.

Facebook, Yelp, and Google review pages invite unfiltered comments—the fact that these comments were not based on direct consumer experiences was not the point. There may be several factors in a negative business experience unrelated to a business-consumer relationship. Rather, as Saper Law argued, it is more relevant to consider whether a reader would determine whether the comments posted were opinions or facts. Considering that reviewers were attacking Freydin’s (offensive) opinions by posing their own, the comments in the case are clearly not factual or libelous.  The Seventh Circuit Court of Appeals agreed.  The appellate court upheld the district court decision, affirming that each statement made by reviews were expressions of opinions about Freydin’s values rather than his legal abilities and thus inadequate to support Freydin’s libel claim.

An excerpt of the Seventh Circuit’s Appeal Opinion

The result? A decisive victory for Saper Law’s clients. The claims were all dismissed, with new Seventh Circuit precedent established regarding non-clients who leave reviews for businesses. As long as the reviews are not assertions of fact, reviewers have a First Amendment right to criticize businesses they have not elicited services from. As reliance on digital platforms to endorse and evaluate businesses increases, the implications of this ruling are significant for consumers and businesses alike.

The case’s decision resonated nationally. Multiple national news outlets covered the case, including: Bloomberg, Reuters, Law.com, and The Chicago Daily Law Bulletin. Principal Attorney Daliah Saper also appeared on CBS to discuss the case. “You can’t claim you have a right to make ‘odd and offensive’ comments, then sue for libel when people use the same forum to respond,” she said.

This case is one of many First Amendment and defamation cases that Saper Law Offices has successfully defended over the past 17 years. If you or your business are contemplating bringing a State or Federal lawsuit, or must defend one, book a consultation here or contact  Saper Law at 312.527.4100.